How to Open a Coconut

A lot of people would love to know how to open a coconut to get the coconut water inside. The outer shell is so hard that it seems almost impossible to crack if you've never done it before. In reality it's actually very easy to do if you have the right tools or even if you have no tools at all. Here at CandidaCounsel you'll learn everything you need to know about how to open a coconut yourself at home in just seconds.

For people who live in places where coconuts are not as popular or visible you may have never seen how to open a coconut. There's more than one way to crack it open and it doesn't matter if the coconut is young, green, white, brown, with a hard outer layer, or with husk.


How to Open a Coconut Without Tools

People who live in hot humid areas like Florida, Mexico, or the Philippines, can easily find coconuts literally just laying on the ground. Sometimes they fall from coconut palm trees and end up on the sidewalk or better yet someone's backyard. Some people don't even bother with tools. They just throw them on the ground or pound them on a rock until it cracks open. A few brave people have learned how to open it by husking the outer shell with their bare teeth. But, these people have been doing it for years and know how to do this without injuring themselves or pulling out their teeth. You can find skilled people selling coconuts by the sidewalk or in markets who can open them extremely fast with a machete knife or other method.

The coconut has 3 layers. Depending on where you found or bought your coconut, it might have a green or whitish-gray color of the smooth outer layer called the exocarp. If it has just fallen off the tree or is still on the tree, normally the green exocarp is what you'll see. Some stores remove the hard outer layer for you and sell the coconut with only a thick, hairy husk layer showing which is called the mesocarp. The thin brown layer around the seed is called the endocarp. The white middle layer where the flesh is found is called the endosperm. You can make coconut milk or cream out of the endosperm.

How to Open a Coconut With Tools 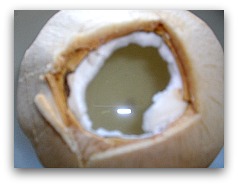 One of the easiest ways to learn how to open one is to simply use a big knife and give four chops to the top of the nut in a circular or square shape. This way, you create a “lid” or “top” that can easily be pulled off and it also looks very neat. The water is right inside to drink.

You can use any of the below tools to open it. If your coconut has a very smooth and hard outer shell (exocarp), and you don't have a knife, use a hammer of any size and bang on the shell in a straight line until it cracks. Once part of the shell is cracked the rest should fall of more easily. As a matter of fact, you can use any of these tools to help open and peel away the brown layer that often gets stuck to the white coconut meat.

If you use scissors, a knife, or screwdriver just poke a whole in one of the 3 “monkey's eyes” as they are sometimes called. You can then put a straw inside the hole and drink the water. Or, pour the water into a cup. You can also put the coconut in a 350 oven to crack it. After it cracks you can then split it open. This is how to open a coconut if you don't want to use sharp objects.

How to Make Coconut Milk

Cut the white meat into pieces with a knife or use a big spoon and place in food processor with a cup of water and process until smooth. Strain the blended coconut with a cheese cloth or clean rag and drain the coconut milk into a container. The milk can be used to make shakes, pies, or whatever you desire.

How to Husk a Coconut

You can husk a coconut the same way you learned how to open a coconut, with a long sharp knife by making thin slices at the outer shell. Once you have the outer shell sliced, you can use your hands to pull the husk off, or you can continue to use the knife until you reach the brown coconut seed on the inside which holds the white milk and refreshing water.