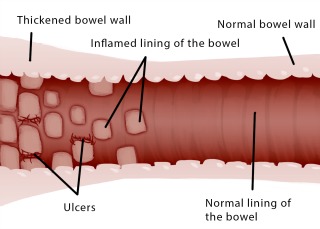 Burrill B. Crohn was one of the first doctors to research the cause of the disease. In 1932, he published a paper describing the condition as “Terminal Ileitis”. Dr. Crohn also worked with Jesse Shapiro, M.D., a doctor diagnosed with the disease who devotedly worked on finding a cure.

From a personal perspective, I witnessed a very close family member with the disease on a daily basis. Crohn's disease caused anxiety not only for my family member but for myself as well. As a young child it was hard to watch someone who was once healthy and active become so sick and bleeding profusely throughout the day. Eating foods like nuts and corn were always a cause of concern as were many other foods.

At its peak, Crohn's disease affected every part of her life. Even going on family vacations were stressful because a sudden flare-up made trips to the bathroom a necessity no matter where we were. I remember wishing I could take her pain away but of course I couldn't. Not even the doctors who prescribed a cocktail of medications could. The severity of the condition just became worse and worse until one day the bleeding wouldn't stop and she was in immediate need of hospitalization.

The solution for the problem was surgery. At that time there was no talk of alternative medicine or other natural remedy. She was told her life expectancy would be cut short and would have lost too much blood had she not opted for the surgery. If she had known another way to stop the pain and progression of the disease maybe she would have chosen a different path but that was not a choice she was given. Through all the debilitating Crohn's disease symptoms I'm proud to say she survived through it, lives a full life, and still refuses to let this condition get the best of her.

How to Diagnose Crohn's Disease

In order to get a correct diagnosis for the disease a doctor can run a series of tests. Since the disease can affect anywhere from the mouth to anus it can be difficult to tell the difference between Crohns and other conditions like ulcerative colitis.

A blood test can be done to check for high white blood cell count. A doctor can perform a colonoscopy to look at the inside of the large intestine. The doctor will need to look at the small intestines by doing an upper gastrointestinal X-ray. More X-ray tests involve looking at both the upper and lower digestive tract to see the extent of the inflammation.

Nutrients and Herbs to Relieve Symptoms

If you're interested in natural remedies, a doctor that specializes in gastrointestinal health may be able to recommend a naturopathic physician (also called homeopathy). They specialize in alternative medicine and minimal use of surgery.

It could also be helpful to seek the advice of a Nutritional Counselor. They can determine your food allergies and sensitivities by elimination diets. Then, they will design a specific food program so you can get the vitamins and nutrients you need.

Some herbs that seem to be beneficial in relieving symptoms and reducing inflammation include drinking ½ cup of aloe vera juice 3 times a day. Pau d' arco is a tea that can be found in health food stores. Rose hips, which is also good for high blood pressure, and milk thistle extract are also helpful.

L-glutamine is a nutrient that provides fuel for intestinal cells while Duodenal glandular helps heal ulcers. Pancreatin plus bromelain assist in digestion. Vitamin D3 is important for a vast number of reasons to maintain health. These are just some of the essential nutrients needed to reduce symptoms and achieve remission. For more information see the colitis diet page.